This is the Forum for all your Citroen Technical Questions, Problems or Advice.

I've been looking into why my V6 has a 15 second regulator tick rate in soft mode but when forced into hard mode, the tick rate goes up to 2 or more minutes.

This I did, front first, and no change in the tick rate. OK, no worries, it's the rear one then, I'll just swap over to prove it. No change in tick rate

Odd. Then to prove further, I then used two "test" electrovalves and hey presto, a satisfyingly long tick rate.

So, is that TWO leaky electrovalves then? I thought on and thought that it could not be as whicever one was substituted, the tick rate stayed substantially the same at about 20s. Surely both could not be duff and leaking by the same amount.

I thought on and wondered if anything else might cause this behaviour. I could not think of anything positive but swapped the antisink sphere. As expected, no difference.

So what could cause a short tick interval just in slow mode bar the electrovales? Nothing really, it had to be the electrovalves leaking.

The electrovalves are switched into soft mode by the application of a 500mS pulse of 12V and thereafter, to hold them operated, a 1KHz squarewave is applied to them as holding current. This prevents them overheating and burning out. It also explains why they hum.

Mine hummed OK and gave a good ON click but the OFF click was a bit muted and somehow, the hum did not sound quite right.

I dismantled a duff electrovalve and determined that the leakage return is positively closed when operated to the soft mode. It is open in hard mode but the valve is held very firmly closed by a spring. Therefore, under normal operation, the valve should only ever squirt a bit of leakage on changing mode as the solenoid moves the needle valve. But if the valve was not being held postively open by a duff ECU signal, it could leak constantly.

I then got my oscilloscope out and looked at the waveform across an electrovalve. I saw this: 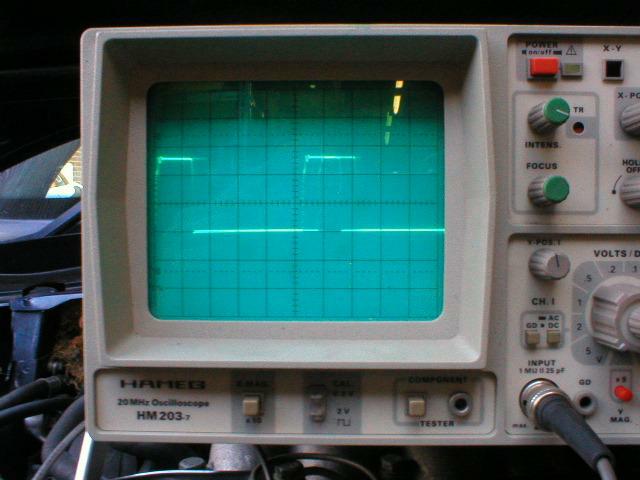 My understanding is that this waveform should be a 50:50 ratio squarewave. This one clearly is not and much of the time, the valve is off. This one is more like 25:75.

I then hung the 'scope on my Activa and the waveform is indeed much closer to 50:50.

So, the ECU would appear to be giving a bad signal to the valves. They're only just holding on and potentially allowing leakage. Strangely, it has no real effect on ride or so I can detect.

Going on your groundbreaking work in finding duff electrolytic capacitors in your Hydractive ECU Stempy, I'll now be taking a close look at the electrolytics in mine to see if that's the cause of the distorted waveform.

You lost me after the first line but it was good reading this post, I am now off for a nervous breakdown Jim..

Why did i buy a Citroen..


Xantic wrote: Why did i buy a Citroen..

That's why I bought one, for the challanges they give. You can never say they don't give plenty in the way of entertainment, fun and puzzlement, especially in V6 form

I'd be lost and bored without a juicy problem like this to get my teeth into.
Top

Does it use the same ECU as the XM Jim? If so sounds like the diodes across the coils are dodgy. The classic symptom of that is a good 'clonk' on switching in but little or nothing when switching out, in fact staying in sport mode. The effect is that it initially switches OK but the 'unsquare' wave is not producing enough energy to hold the valve open but is holding it somewhere in the middle. This was confirmed with one car on which it actually depressurised the centre sphere! Something I have been trying to do since I had the beasts.

I have a couple of spare ECU's you can try Jim, as a point of reference the blocks on my VSX TD shut with such a clonk they can easily be heard from inside the car just after I release the accelerator so healthy blocks shout be noisy if they can be heard above the rattle of an XUD.
Top

No, unfortunately it's not that simple. I've got the diode mod in place on this car Peter. If the diodes within the electrovalve coils are duff and the suppplementary ones are not fitted, the waveform becomes very ragged indeed with lots of ringing and ill defined edges to the squarewaves. The switching in my case is clean but the mark:space ratio is all wrong. You can see a little ringing on the leading edges of the squarewaves but that's normal enough. I'll have to try and get a shot of what the waveform looks like when the coil diode is duff.

Mine quite happily switches into soft mode and stays there but I remain unconvinced the valves are remaining fully switched because of the observed uneven mark:space ratio and hence the leakage leading to the fast regulator tick.

I would imagine the later XMs with Hydractive 2 used basically the same ECU, albeit differently programmed. Either Paul (citroenxm) or John (xmexclusive) ran a thread on the various Hydractive ECUs a while back. I'll see if I can dig it out.
Top

DickieG wrote:I have a couple of spare ECU's you can try Jim

That'll be really helpful. Indeed, my Activa ones shut with a fair old clonk so a soft finish may well point to something not happy...

It's not doing a bad job at all Richard

A scope! Can't argue with the visuals there; it's a lovely tale of how things shouldn't look. Brilliant work.

All we're missing is a sample of the healthy waveform.
Top

The mark-space ratio is fairly obviously set by the microprocessor, but what inputs is it looking at? One design would be to assume that the electorvalve charactoristics are practically constant, and just vary the mark-space to compensate for measured battery voltage.

Another scheme would be to also measure the actual current drawn by the electrovalves and vary the mark-space to keep it constant, which would introduce a few more analogue components to fail.

Is the same drive waveform used for both electrovalves? if so, that would more or less rule out the feedback scheme.

If you are opening up the box, you might want to check the wavefom on the status pins of the VN505Ns, there might be something happening there...

BTW, let me know if you want to try my Mk1 hydroactive ECU for comparison. I am fairly busy this weekend painting the dining room, but may need an excuse to get out of the house.
Top

Having never actually looked at the waveform, I bow to your superior knowledge

Presumably then, unless the coils have shorted turns the problem must be with the ECU. Having several XMs doesn't half make fault finding easier.

xantia_v6 wrote:One design would be to assume that the electorvalve charactoristics are practically constant, and just vary the mark-space to compensate for measured battery voltage.

That's a good thought and makes sense. Fuel Injection ECUs do just that although I would not have thought the hydractive electrovalves would have been that sensitive to relatively small battery voltage changes in the same way that fuel injectors are. It will be useful to measure the current flowing in the valves and compare with the Activa. Right now it's too late to think up a good and easy method to do it. Perhaps measure the voltage drop across a low value series resistor with an AVO and work out a rough RMS value or use a 'scope across the same resistor and calculate more precisely the RMS value.


xantia_v6 wrote: If you are opening up the box, you might want to check the wavefom on the status pins of the VN505Ns, there might be something happening there...

I must try and find a datasheet on them and learn how they work. At the moment I assume they're just high current drivers. I expect the web will provide for my needs

Both electovales show the same waveform so the inputs to each VN05 must be common. By design both electrovales switch simultaneously.


xantia_v6 wrote:I am fairly busy this weekend painting the dining room, but may need an excuse to get out of the house.

I'm busy this weekend too! If I don't spend some quality time with someone this weekend I'm going to be dead meat. I get complaints about the time I spend "tinkering" with my cars

This investigation will be on hold now for a few days but I'll be giving it some more thought during that time...
Top

There's absolutely no superior knowledge here Peter! I'm very much into new territory on this and for all I know, I may well be barking up entirely the wrong tree...

CitroJim wrote:I'm busy this weekend too! If I don't spend some quality time with someone this weekend I'm going to be dead meat.