Tell us your ongoing tales and experiences with your French car here. Post pictures of your car here as well.

Oh God yes.... I've heard it said that you spend the 1st 2 years teaching them to walk and talk. And the next 16 telling them to sit down and shut up!

I would need to tranquilise them before I took them on a 3-day road trip!!!!
Top

RichardW wrote: ↑
01 Jul 2017, 09:30
Not driving there, but will be driving there IYSWIM!! 1600 miles from here - whilst I wouldn't mind that, doing it with 2 small children who are incapable of not talking continuously at the tops of their voices would be trying to say the least!


So are you suggesting we should enjoy the time we have left before our little boy starts talking ?

Enjoy every moment with him Simon... Before you know it he'll be all grown up... Time with your children is the most precious as it's so fleeting...

But yes, enjoy the time before he can answer back

Back from the Portugese oddessy

Good time was had by all. We were staying up in the hills SW of Porto - the roads are something else; all corners hugging the contours of steep slopes - would be ideal Activa territory; although not if you have a nervous passenger who doesn't like edges and steep drops, ahem....

The hire car was a 308 HDi hatch; 95PS I think. A good chance to try it out, as it (in SW form) would probably be the replacement for the 307. It's pretty good. This one had a rearview camera, which appears a gimmick, but turns out to be almost necessary as the rear view is negligible - you can't see the car past the rear door handles, and the rear window is the size of a letter box. Didn't really get on with the small steering wheel, it just seemed to block the central instrument view (ie the speedo

), but I suspect with a bit of mod to the position it could be made to work. The analogue speedo is right off to the left (in LHD of course) so not much use either. The central control screen is a bit of a PITA - I can't imagine adjusting the HVAC settings on the move when driving, other than a temperature adjustment. It had sat nav - which we didn't use, but having a real time map in front of you is a real boon.

A few older cars spotted - mostly Renaults! There were at least 3 custard yellow R4s in the local town, and any number of R5s. Saw a few R11s, a 12 (looked to be off the road). A couple of 2CVs - one on the move in Porto (when we were temporarily displaced on the way from the airport

) and a black / yellow Charleston which looked to be in fine shape. A couple of 'proper' Minis. A Mustang on the motorway near Porto. 4 Xantias - a SD (amusingly sporting Activa badges!), a tidy looking TD and 2 1.6is - at least one in use as it was parked up in the town, and was an early non air bag sinker. A single XM. 2 or 3 BXs, all looked to be off the road. A single C15 - although there was a proliferation of other small vans. A few ZXs - a couple badged 1.4D. A few AXs. A LOT of Opel Corsas (what we would have called Novas). Cheap mode of transport appears to be small engined 2-stroke motorbikes / mopeds - there was a 2 stroke oil dispenser on the forecourt at the local fuel station. When was the last time you saw one of them! Also any number of pick ups (mostly Nissans) with wooden load beds. Some amusing micro cars thingies - they appeared to have tiny single cylinder diesels, sounding like a bag of bolts, and limited to 50kph. No charging points - only saw 1 Zoe and 1 I3 - diesel is 20% cheaper than petrol, so no real surprise.

Tomorrow fitting the starter on the 307 if it's not raining....

Sounds like a lovely holiday Richard. I'd have been terrified of those roads as a driver, let alone a passenger. Reminds me of Cyprus up in the mountains..

In the 1970s in the UK but they were still very common and ubiquitous almost on every forecourt in Cyprus in the 80s...

All the best, have fun and the weather looks set fair for it

If it's sunny, you're welcome to come and practice your 'French' on getting the starter out

Tried, and failed to fit the new starter

I just cannot get on the top bolt, starter motor side. The wiring loom comes down close to the rear of the starter body, and this prevents getting in any of tools I have. It's a 6mm allen; I think maybe a long reach allen key on a socket might *just* slide in past the solenoid, but I don't have one. And there's not really enough room to get in there with 2 arms; well not unless you are like the aforementioned Orangutan

For anyone silly enough to try here is how to get to the point where you can't get the bolt out!

Jack up NSF and remove the wheel and arch liner (6 or so plastic rivets). Remove the 13mm bolt you can see in front of the strut, and clean and plus gas the other 3 bolts sticking out (one is hiding behind the spring!).
Refit the wheel, and run it up on ramps
While the BSI goes to sleep, remove the front flexi exhaust section - just the two clamps (the rear one is awkward over the subframe).
Unbolt the vac reservoir (a wholly OTT 16mm bolt

) then lever if off the clip at the NS; this will give you access to the top to unplug the vac hose(s). I found this very difficult - possibly it would easier if you depleted the vac first as there was a hiss when I finally got it off. If you disconnect the one on the OS, then there is room to tuck the res out of the way to the other side without needing to remove the other hose.
Back to the top, remove the air hose, battery clamps and cover, then holding down clamp on the OS and remove the battery.
Remove the 4(!) 13mm bolts from the tray - one at the front, 3 into the wing (those you cleaned earlier!),and then the T27 bolt under the battery clamp and lift out the battery tray
Disconnect the earth point on the top of the gearbox.
If you now get a mirror and look under the thermostat just to the rear, you will see the top starter bolt - a 6mm allen. I managed to get on this with a short and long wobble extension, that allows the end to come up above the battery tray, with just enough room to get the ratchet on the end.
Back underneath, and there is a 13mm nut you need to remove - it's sort of above and forward of the solenoid; you can just see it, but it has to be undone by feel.
13mm and 8mm nuts to remove the wires from the starter.
You are now at the point I got to - where I cannot get a tool onto the top bolt....

I just cannot get on the top bolt, starter motor side. The wiring loom comes down close to the rear of the starter body, and this prevents getting in any of tools I have. It's a 6mm allen; I think maybe a long reach allen key on a socket might *just* slide in past the solenoid, but I don't have one. And there's not really enough room to get in there with 2 arms; well not unless you are like the aforementioned Orangutan

Would one of these long reach ball head Allen keys work do you think ?

The 6mm one is beside the ruler to give an idea of its length. I literally just bought this set from LIDL 2 days ago for the princely sum of £3.90.

If you have a nearby LIDL nip in and see if they still have any, if not and you think it might help I can drop mine off!
Top


And then he was never heard from again.

Looks a handy set - Lidl on the way home from work, and one here, so good chance I can bag a set. Might need a socket drive one to crack it off, but the ball end probably useful for winding it it once it loose.

It's a completely crass design - another 1/2" up on the wiring loom and it would have been easy to get out!
Top

Ring end of a spanner over an allen key usually gives the extra force needed to crack off a stubborn nut.
Top

Would one of these long reach ball head Allen keys work do you think ? 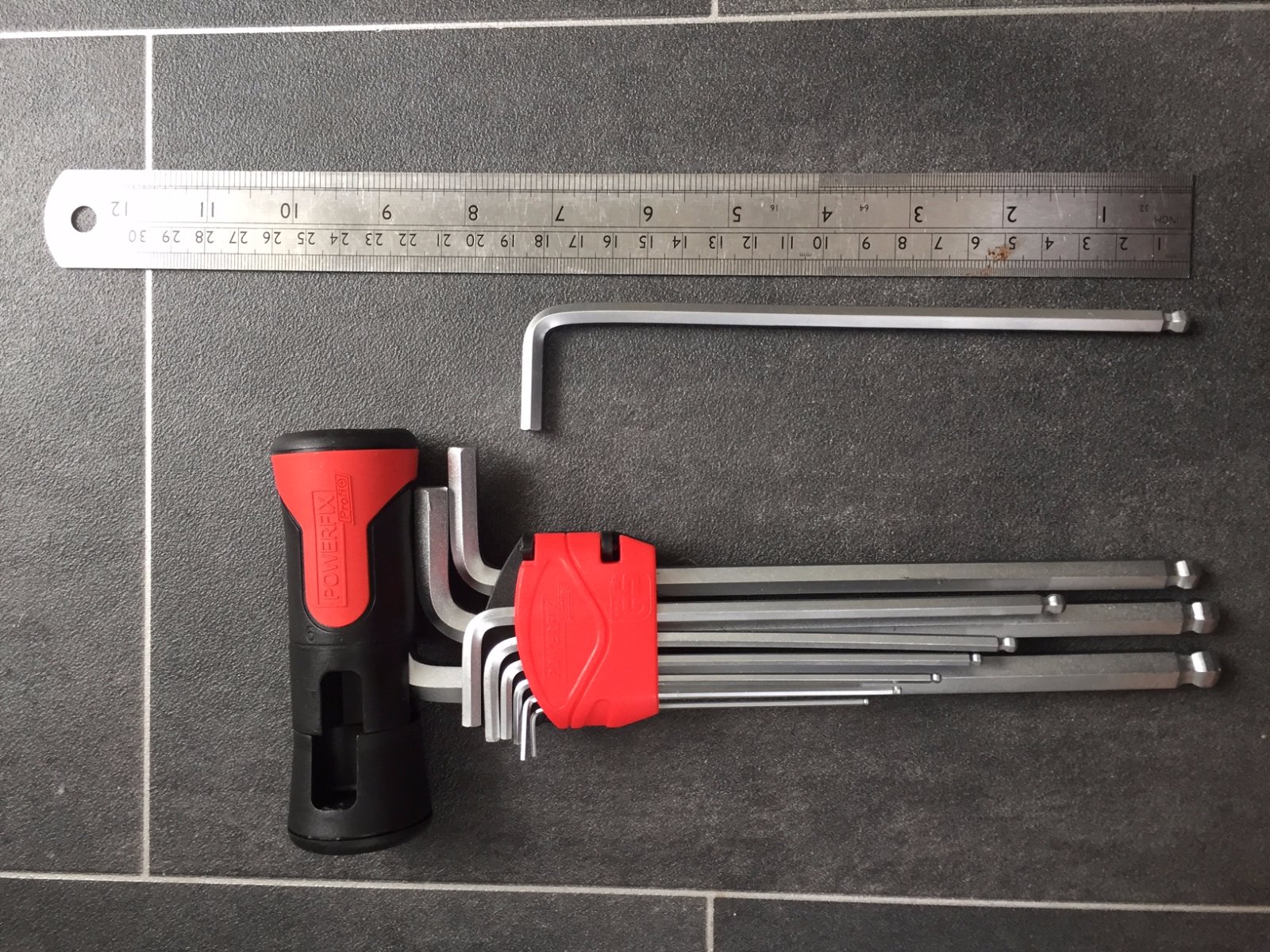 I have a set of those now

I reckon the ball end bit might actually be a bit long, but it should turn easily once it is cracked, I can always cut the return part off.
Top

I reckon the ball end bit might actually be a bit long, but it should turn easily once it is cracked, I can always cut the return part off.


Not sure what you mean by the ball end bit being too long ? or do you just mean the entire length ? Would you be able to attach the plastic handle to the end or would that foul something ?

LIDL are turning out to be a great source of cheap tools - for £4 you really can't complain, and their battery charger was good too!

Return to “Blogs and Galleries”