This is the Forum for all your Peugeot Technical Questions, Problems or Advice.

very welcome whenever David but late at night you won't be.. 4AM though is OK

Are you telling me your bro got rid of Civic? You must have been working on him

Nope, his Civic is still here Lexi. He sold his fiancés 206 XSI and bought this in it's place. I think he wishes he hadn't done now as this has been nothing but a ball ache!
Top

DHallworth wrote:Well I've chickened out of doing the chain myself. The job has been given to BL Auto's and is being done at the end of October. Everything timing chain related on the engine is being replaced. I described the symptoms to Robert on the phone and he said that it certainly does sound like timing issues so hopefully this'll be the end of the problems, once and for all.

A friend of mine had all sorts of issues with his DS3 (the same engine) he ended up with it running on three cylinders after a coil pack issue (seems to be a common problem). The car was damaged to such an extent that the bill came to £1500 although this was covered by the warranty.. Peugeot Citroen are not doing themselves any favours with the current engine line up!

Reading this with interest, as we have a few of these that are "flat".
Chain is the default excuse , but normally you get an engine light on due to the timing anomaly . Changing the chain is quite an easy job if you have the setting tool, it's very well designed for ease of replacement, and is a lot better to change than many cambelts I have done. 3 hrs is plenty once you have done one.
One engine I did, had an issue with the coolant temp, this happened because coolant had leaked into the temp switch plug & crept up the loom causing a high resistance. The car thought the engine temp was about 20 degrees hotter than it was so very weak mixture meant very slow car especially when cold. Took some finding .
I currently have a DS 3 racing in at my engine builders having pistons replaced, this has about 30 ish k on the clock.
Whilst researching the fault , we came across this , not sure it's your problem, but we carried out the mod on a car the other day & it made a noticeable improvement to the running. This is why the valves carbon up if that is the problem, and only costs a few quid for the bits .
http://www.e-tuners.com/index.php?s=12&t=299
Please post your solution, if found, always keen to find fault issues with these engines.
Top

Apologies for the delay in updating this, it's been a hectic few weeks!

The timing chain on the car has now been changed. We had a trip to BL Auto's on Friday, Robert did the work on Saturday and we returned home on Saturday evening.

The old chain had noticeably stretched and loose, it was a complete link longer then the new chain and the sideways sag in it when holding it at either end was unbelievable. Robert got the crank pegged ok but had to rotate the cams to get the tool on it as the timing was out. All of the teeth on the sprockets were worn as well, apparently they were nearly half worn when compared with the new ones. The crankshaft oil seal was also found to be leaking, thankfully Slip End Citroen had one in stock so we managed to get there and get it. The difference in the car is unbelievable. It now idles beautifully smoothly and pulls much better then it ever has done since we've had it.

It is still down on power though. Book time 0 - 60 for the 207 GTi is 6.9 seconds which means that it should more then hold it's own when put up against the Activa V6, it doesn't, the Activa pulls away from it without breaking a sweat. Top speed for it is supposed to be just over 135mph, it couldn't even dream of getting anywhere near that.

In the last 12 months, this car has had the Auxiliary coolant pump for the turbocharger changed, the high pressure fuel pump changed, the catalyst has been changed and now it's had the timing chain done as well. It's had a lot of money spent on it.

When speaking to a BMW specialist this morning and tell him what work has been done he was a bit surprised that we were still having problems. He asked how many miles it's done and when I said 65k he said it's probably carbon on the back of the inlet valves. Apparently BMW have machines that they can use to "Walnut Blast" the back of the valves. It's like sandblasting but they use crushed walnuts as they're much softer and don't do damage like sand would.

The specialist wants a look at the car before he commits to doing it as he's not sure what the access is like on the 207. Citroen/Peugeot's answer to this problem is taking the head off and decoking it that way which isn't happening since the chain has just been done. If it comes to it, I'll take the engine out of the car and let him do it that way.

Here's a picture of a BMW mini inlet valve that is apparently "not that bad": 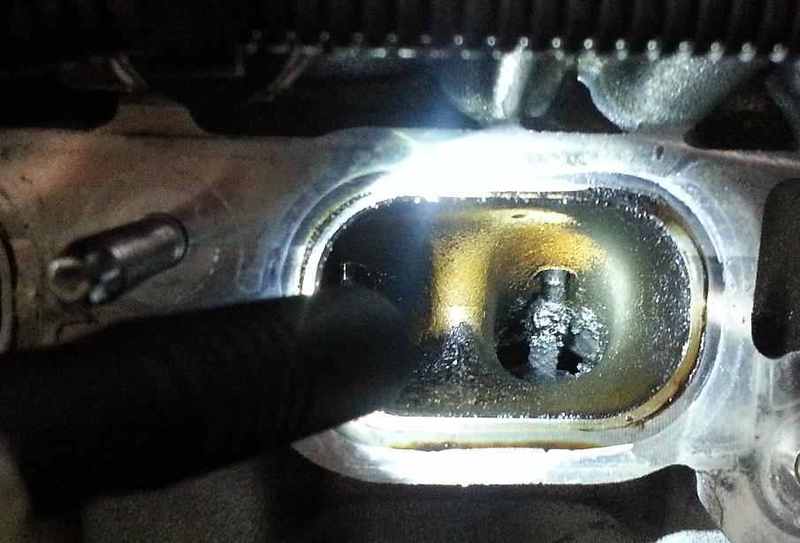 Here is one that's a lot worse: 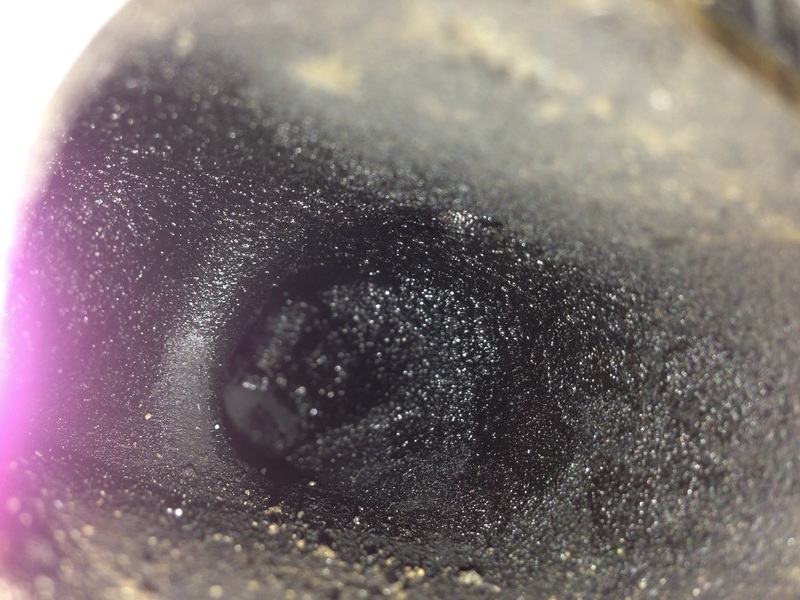 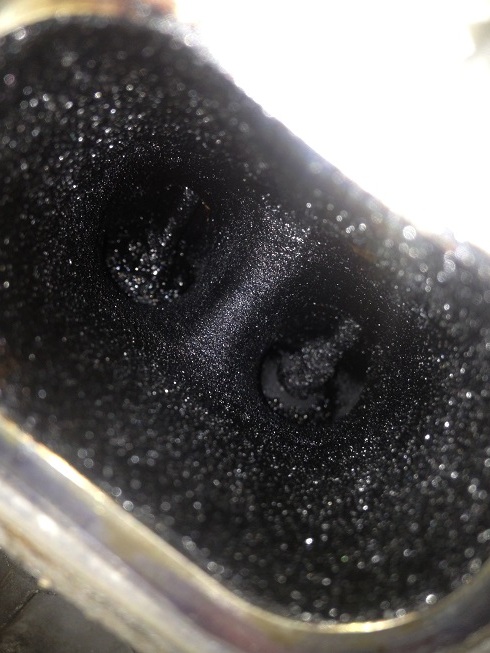 Here's one after being "Walnut Blasted": 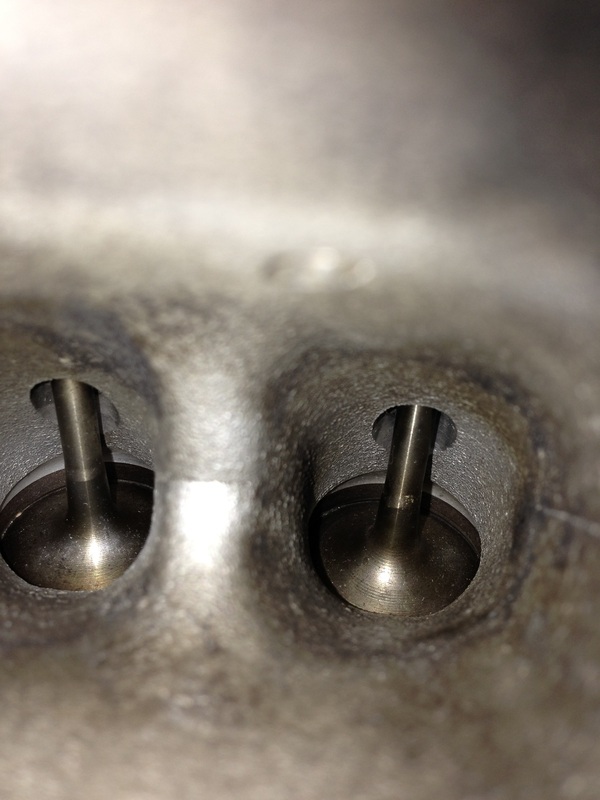 So, at the moment it's a lot better but still not right.

I'll keep this thread updated as we go as there's very little information out there other then "replace the timing chain".

Bloody hell.. ive seen cleaner diesel engine valves then that.. and prv 24v valves cleaner too and there is a decade or two between the designs...
Top

These pictures were taken using an inspection camera at 25k

Gosh! I'm shocked at that carbon... As you say Paul, even an XUD with operational EGR is cleaner than that..

As for an ES9 they are normally spotless even at 200K.

What is the root cause of the carbon build-up? EGR?
Top

The problem with these engines is that the PCV (crankcase ventilation) was not designed very well, and picks up lots of oil vapour from near the timing chain, and delivers some of it directly into the inlet tract. This would be OK in a conventional petrol engine, where the spray from the injectors would wash it off the inlet valves, but being a direct injection engine, it just sticks to the passages and valves and slowly carbonises.

The cam covers and PCV valves were redesigned in 2010 I beleive to reduce the problem, and I have read that on some engine variants the design was changed so that the PCV gases go through the turbo, rather than directly into the engine. I have not learned how effective these measures are.
Top

xantia_v6 wrote:The problem with these engines is that the PCV (crankcase ventilation) was not designed very well, and picks up lots of oil vapour from near the timing chain, and delivers some of it directly into the inlet tract.

I'm really quite shocked that such a modern engine should have such a fundamental design flaw as this...

Main hinge on a metal Tin Opener in plastic ?
Top

Yes, after all these years of dealing with PCV I'd not expect a major manufacturer to make such schoolboy errors as this...
Top

Or make a rain collection area that feeds directly onto the engines injectors....the list is long Jim

I had a chat with my neighbour today, the one who has just rebuilt a prince engine in a Mini. He apparently imported the car from Japan, knowing it had a 'blown' engine. The engine would apparently run (just) but knocked badly.

It seems that the previous owner had never had it serviced after the warranty ran out, and it eventually ran out of oil!

The big end bearings were run, and the piston rings had lost tension (not to mention the inlet ports almost blocked by the soot discussed above, but luckily the crankshaft and bores were undamaged so the rebuild was not too expensive (I presume that the turbocharger survived). The timing chain was apparently not stretched, but the chain guides and tensioner were worn.
Top
Messages: 69