This is the place for all your Diagnostic related questions or advice.

Hi all, glad to say I've just spent an hour or so repairing my dead VCI at last

The issue I had was when plugging in, it wouldn't activate properly (green light came on then went off, as if I had the UDMF driver even though I have multi instance). Another symptom I noticed was that I could no longer change the firmware with interface checker, it was stuck with 4.1.6 even though I could select any of them, apply and get an immediate "telechargement OK" message. When I checked the version it was always 4.1.6 no matter what.

Armed with those symptoms and the knowledge that it'd almost certainly taken a knock in the garage one day, I suspected a solder joint cracked. Furthermore I suspected it was a programming enable pin on the Flash ROM. This is built into the main processor, a Fujitsu MB90F546 GS so I went about carefully reflowing all the pins with my smallest soldering tip and lots of flux. First couple of goes, no joy as I must have bridged or missed something (it is positively miniscule! Would highly recommend anyone else using magnification to verify their work) but 3rd time round, I plugged it into my Diagbox notebook and wow, flash flash flash and she's alive, just changed the firmware version and that's worked, also went into DB 7.57 and it automatically updated the firmware itself on startup.

So it is possible to diagnose the diagnostics kit, if you really want to!

Also in the course of my fix I stumbled upon another person who had an issue with a cracked trace causing lack of VCC to a pull up resistor. Link to that fix HERE

LOL, not a word of that did I understand

Haha, basically I did soldering and I fixed it!

Had a software corruption issue to deal with before I could test it properly but it's all working and got one of the 206s looked at earlier, and am happy again after a week of stress and rushing!
Top

Pretty please can I send you mine?

Basically, I get the green light sometimes but it’s not recognised.

Before I messed about trying to desolder the 15 pin D sub, it would light if I pressed and held the connector

I’ve had a go with a mate’s desoldering station today for fun and it’s done a nice job although I still cannot remove the serial connector. I want to have a look and see if two data pins are soldered together under that side of the board.
Top 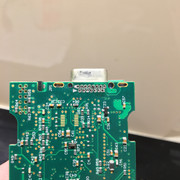 Was that one of the vacuum pump type stations or hot air? I think owing to the amount of metal in the connector and the plated through holes it might need to be worked off using hot air to keep things flowing. Also, it sometimes helps to re-solder everything with fresh 60/40 solder as the original lead-free stuff can be a pain to work with & usually desoldering works better once it's been "diluted" with the good stuff.

If you get fed up of it & in no rush you'd be welcome to post it over here & I could have a look at it. I don't have hot air (well, Emma may disagree!) but am pretty patient with fiddly soldering!
Top

Could you do me a favour? Have you got any photos of both sides of each board please?

I am pondering whether to buy some optocouplers and upgrade the board to a Rev C. It's got to be possible. First of all, I ought to get it up and running. I'm really getting into this electronics repair mullarkey. This is a bad thing! I have enough on my plate but can't help trying to resurrect it.
Top

At some point I’ll consider upgrading the components if I can identify additional components required.

Managed to get it reading intermittently and it actually seems to be the USB cable to laptop which is faulty.

If I grip it and rotate it slowly it sometimes brings up ACTIA USB Device in Device Manager.

So my next question is is this classed as a USB to 15 pin VGA D-Sub cable or USB TO 15 pin EDID?

All pinout diagrams I find of VGA only mention colours, returns and grounds but I’m worried if I get the wrong cable it will be wired incorrectly internally.

Be mint if you know the answer to this!
Top

The USB carries data not video. Think of it as a super enhanced RS232. USB is much faster, has greater bandwidth carries data over greater distances.

Definitely a cable issueI think. The connectors are pretty poor. I was trying to identify what exactly the cable is ie USB-EDID?

Anyway, managed to pick up a cheap one on Ebay for £0.99. OK. It’ll be crap but surely better than the one I have?

If it allows me to ascertain whether the Lexia is still viable then it’s worth it.

Once confirmed working, I wouldn’t mind upgrading Rev B to Rev C if it only means adding some additional components.

Do you happen to have any high res
photos of a Rev B or C board? The optocouplers all seem to have different numbers!
Top

Up and running Lexia again.

I've identified the optocouplers as being Fairchild. But would love to see a photo of anyone's Rev C board to see if it is possible to upgrade the components as the optocouplers on my board have two different designations.

Made up that my resoldering of the IC chip and the serial connector hasn't affected anything.
Top