Guides on how to approach the more common problems experienced by our members.
Please don't post in this forum but link to the threads here where necessary.
Anyone wishing to create a howto please submit to a mod or admin for inclusion here. Subject to being edited.

I had a what seemed a daungting task of replaceing a C5 supension pump this week, I asked on here earlyer in the week about the process and there was a few posts but none with any pics. I managed the job yesterday, and was not anywhere as bad as I thought. I physically got the pump and motor swapped in about 2.5 hours, but had a small issue as later....

Firstly, jacked the car up, and to make it perfectly accessable removed the drivers wheel and arch liner, and also the headlamp to help things..

I decided it was essential to have the tank removed and couldnt do it without... but firstly, used Lexia to lower the car right down to its stops and depressureise it... that was the easy bit.. and then disconnect the battery.... 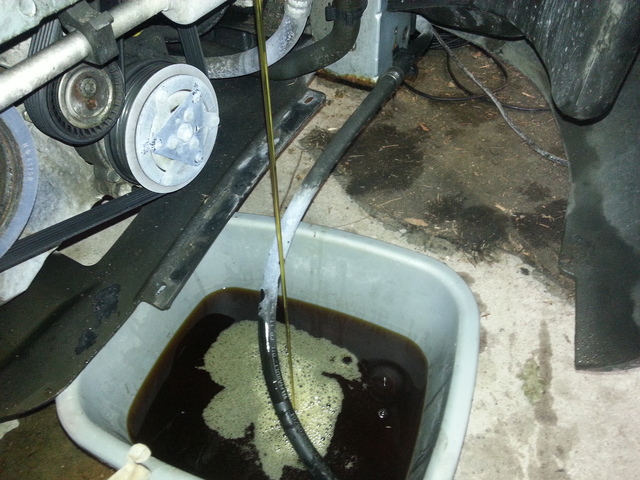 So I popped the LHM pipe off the bottom of the tank, as the spigot outlet is the lowest point in the tank.. 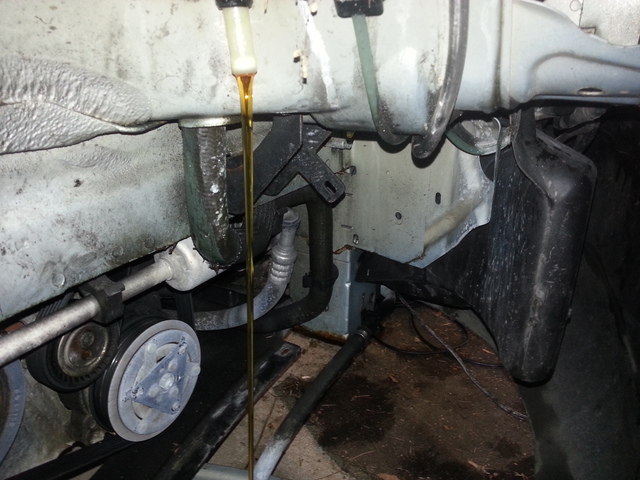 And left it drain..

the tank is held in place by the two 10mm nuts on the inner wing and located by the pipe outlet, after draining, lifted the tank up and removed the second feed pipe off the bottom, theres two small pipes aswell, these can come off too.. and take the tank away to make things far easyer.

These two nuts secure the pump to the chassis leg.. 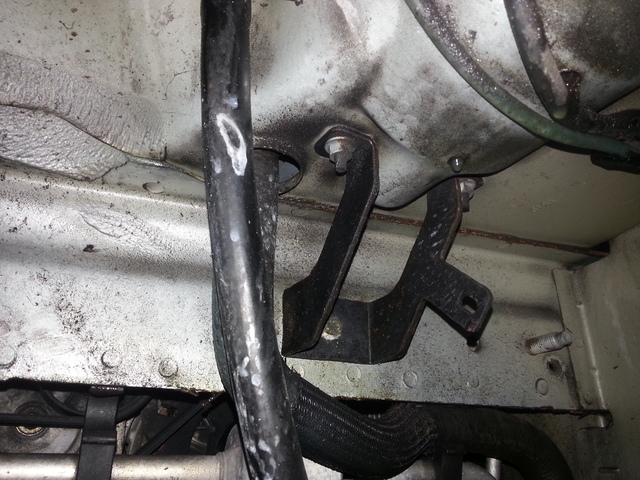 The front of the pump is on a pair of rubber feet that just slip into a bracket.

Remove the two High pressure feed pipes, yes just two... from the front and back. CAUTION: There is a small rubber seal on the tips of the pipes these both popped off the ends when I removed the pipes.. 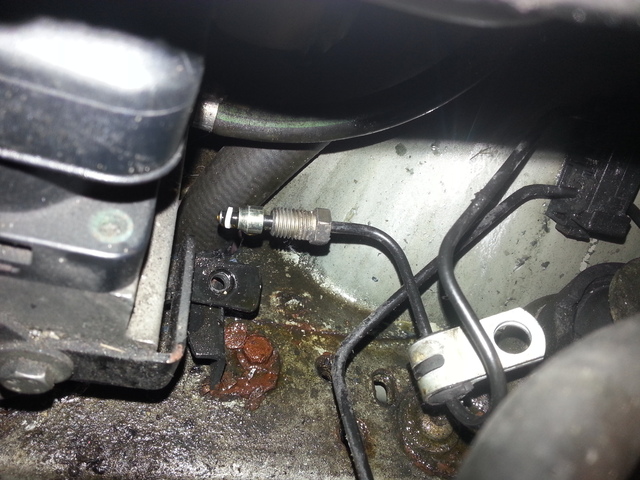 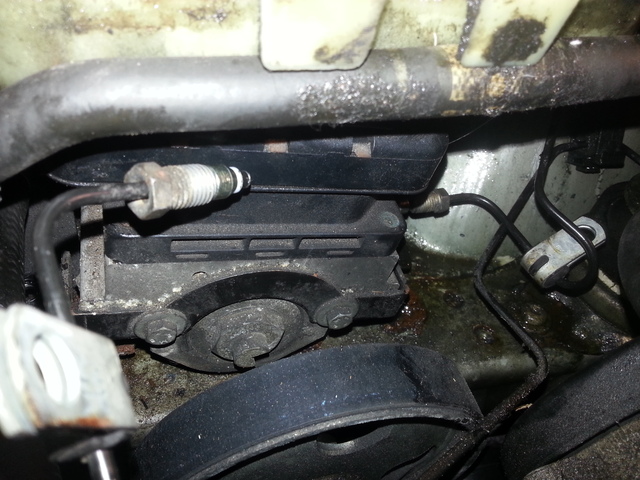 They appear a bit thinner then Pipe work of Xantia and XM age and flex slightly easyer, but managed to move them out the way. They are held to the front vracket by two useualy eye clamps, held with a 10mm head bolt...

There are three Plugs, one to the ECU and two to the motor, I think signal and main power, on the left here seen through the headlight appiture 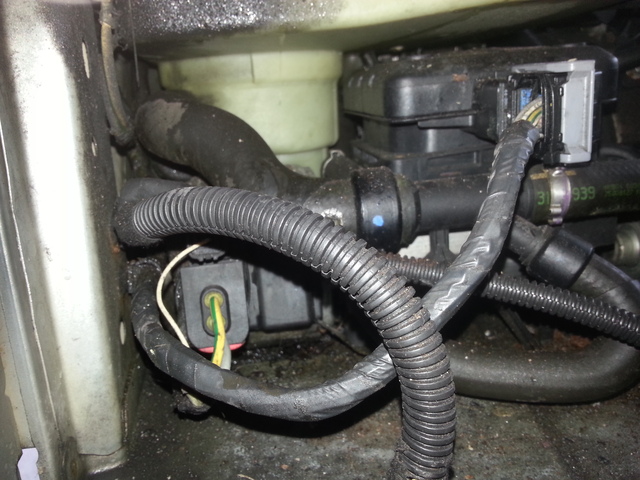 I didnt take any pics of the assey with the tank removed, but once the two pipes are out, tank away, and two nuts underneath are out, remove the plugs and the pump and motor needs moving towards the PAS pump to unhook the front rubber feet and out..

Now followed two suprises, and some notifications. There was a slightly different number ontop of the replacment pump ECU, however, I ignored that for now, and also the rubber hose that came with it did not have a T to the PAS Pump, indicating to me the pump was off a car with electric PAS.

So, I installed the pump/motor in place, fitted the pipes, connected the plugs up and fitted and filled the tank and there came my first problem. While there was no life from the pump still, we popped the fusebox up to check the Maxi Fuses, and amazingly all were ok! Put it all back, I then connected the battery and we had our first problem. The car would start but then I could take the key out and she was still running. I also noticed after a mechanical stall the Fuel and battery guages were staying on. I also saw Lexia didnt recognise the suspension ECU for the specified car. After a bit of head scratching it hit me, I unplugged the suspension ECU that was with the replacment pump and normal in car service resumed.... The replacment ECU was not compatible.

So looking at the removed pump, the ECU had 4 bolts through the body holding the ECU on... 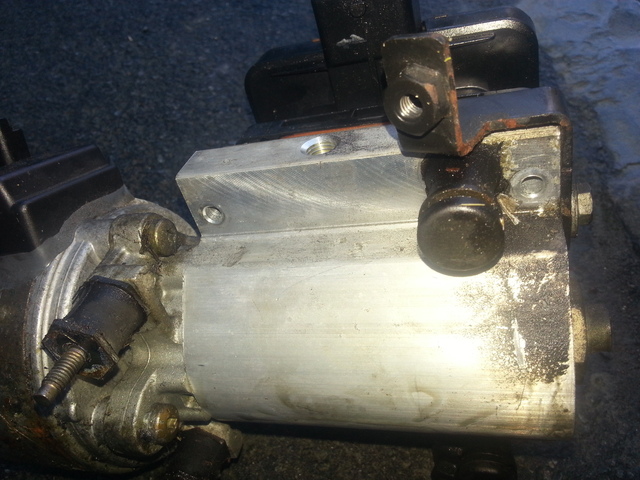 Popped the bolts out and well hey presto this presented me! 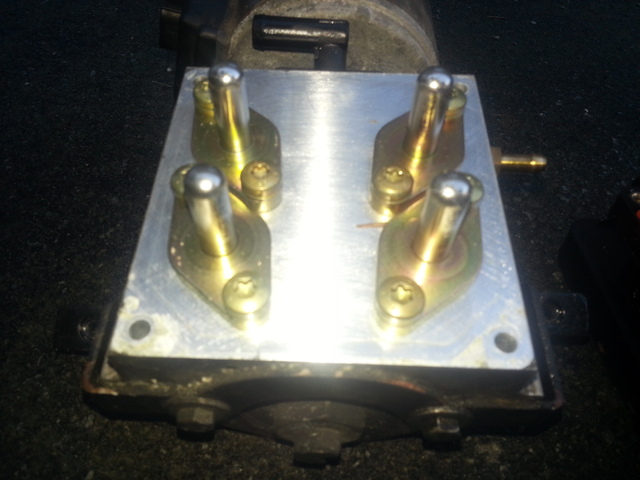 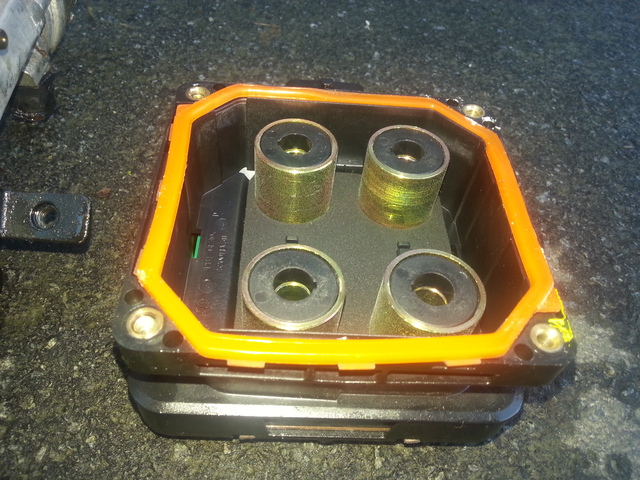 How about that then! I have no idea whats going on there... lol .. so, I decided to fit it to the pump id just put on the car... stripped it all down again and swapped it over... back together again... moment of truth. Put battery on.. ensured the tank was full, and hey presto, normal service resumed on the dash, the engine started and stopped and the pump kicked in, but even more to my suprise which had a few of the other posts saying the tank needs pressure in it, this one didnt! Bear in mind, it was an empty pump, I litterally just filled the tank, the pump came in and she was fully working again, the back came up normal service resotred! One happy owner!

This is the assembly as a unit on its own, the pump is actually bigger then the motor.. 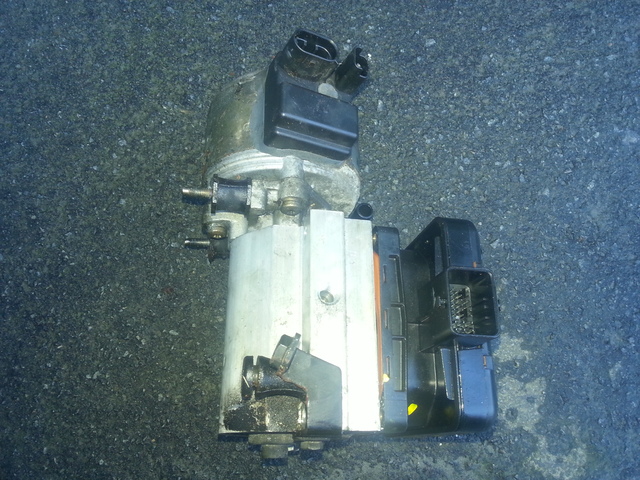 So, this is now the second one I have heard of to fail, however as I pointed out to the owner, in respect to the car having done 213k, and the motor does only drive the suspesnion, its not bad for an electric motor really! Its a good life for an electric motor, where a mechanical one would last a lot longer.

Ill - one day - have a look at the motor and see whats happened.

As for splitting the motor from the pump which I read else where on here, I cant quite see how as the motor is against the inner wing with the pump facing the PAS pump.. An actually pleasent but slightly messy job to do, but the fact that didnt help the owner had previously put extra LDS in, so when I depressurised the car with lexia it over spilled from the tank... otherwise, not a hard job to do.

Conclusion: Simply a dead motor, both ECU and Maxi Fuses all intact!

Did you find why the motor failed Paul?
The others mentioned on the forum seem all to have been the victims of corrosion to the wiring and in some cases repairable.
Added this thread to the links to pump problem thread.
Top

I havent looked at it steve.. the cars wiring itself was and is all ok.. ill get round to it..
Top

Paul, this is excellent

One for the wiki

Ive had some owner feed back on this job.. the reports are a faster resposne to the suspension button height change and also better more responsive brakes too.. It would seem these have same kind of effect like the old lhm pumps at high miles and get weak too..
Top

Shouldn't affect the brakes though, they are a separate system.
Top

Course not... doh... it must be a coincidence then steve... I know its a seperate system that uses conventional dot3 fluid...
Top

Great description, I just wondering have you checked the pump inside, only for curious? Is it worth to try to fix internal leakage to stop the level drop when parked up? My C5 developed the issue recently and I'm afraid it is the pump rather than anything else...

Some good down and dirty spannering Paul. It will be really useful for many.
Top

Hi.
I have mk2 petrol and i've just cleaned my pump motor also, so I removed the ecu and it looks just as in the above photos.
I wonder if a pump unit from a diesel c5 with my body and suspension type would work with my petrol ecu? Could be.
Top

If you use your petrol ecu on top of the derv pump there be no issues.. a pump is a pump its the ecu thats important and car matched
Top
Messages: 11 • Page 1 of 1

Return to “How To”